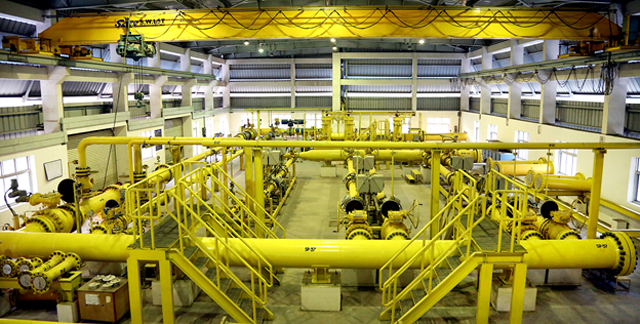 Nicknamed as Hazira Meter Prover Facility (HMPF) is an integral part of GAIL (India) Ltd. and is installed and operational at its Hazira Compressor Station, Surat (Gujarat) having the widest range of flow meter calibration capacity for the Turbine and Ultrasonic flow meters in India. It uses the master meter method based on the mass conservation principle.

GAIL India Limited was incorporated in August 1984 as a Central Public Sector Undertaking (PSU) under the Ministry of Petroleum and Natural Gas (MoP&NG). The company was initially given the responsibility of construction, operation & maintenance of the Hazira - Vijaypur -Jagdishpur (HVJ) pipeline Project. The pipeline was commissioned by the end of July 1987. Since its commissioning, the need for gas meter calibration has been catered by the Hazira Meter Prover Facility.

The 1st Generation facility was commissioned in 1987 along with the HVJ pipeline project. It was initially designed to cater to only up to 12 inches size and 600 class turbine flow meters.

As technology improved and different kinds of gas flow meters came into use, Hazira Meter Prover facility underwent major upgradation in 2012 and is now fully equipped to calibrate all types of gas meters ranging in size from 2 inches to 20 inches. 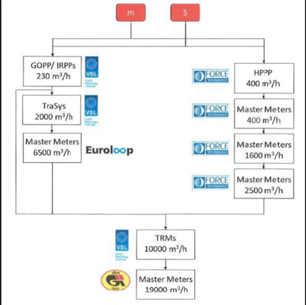 Hazira Meter Prover is traceable to the Gas Oil Piston Prover (GOPP) of M/s VSL, the Dutch national standards institute. The GOPP is the primary standard for the cubic meter (m3) in the Netherlands in the range of 1-61 bar absolute pressure. M/s VSL’s Travelling Reference Meters (TRMs) are calibrated with the GOPP which have been in turn used to calibrate the Hazira Meter Prover Facility, thus making the facility traceable to the GOPP of M/s VSL.

Hazira Meter Prover Facility uses the Master Meter method based on the mass conservation principle. In this a master meter and test meters are kept in series and mass entering and exiting the loop remains fixed. The volume quantities of the meters are converted to mass using the actual density and real gas factors calculated using an online gas chromatograph in the system. All quantities measured are corrected for deviations. In addition to these corrections the double timing method is used to avoid truncation of pulses in the time interval during which a calibration run is performed.

Based on calibration slot, customer is asked to dispatch the meter at least a week in advance. Meter received is inspected for any physical damage and an acknowledgement of the receipt is sent. After preliminary servicing of the meter including cleaning, lubrication, spin testing, electronics check etc. the meter is labelled and put in storage, waiting for calibration.

Meter under Test line is depressurized and meter is installed at designated place. Though the facility has a large inventory of spools and reducers in different schedule size which can be used on customer suitability, still we suggest bringing the actual inlet and outlet spools that will be used in field with the meter to be tested. The line is then pressurized and thorough leak check is performed.

A typical calibration starts with running the meters under test at maximum flow rate for stabilization of the process parameters. During this stage, temperature and pressure differences in the pipe system are equalized. Then the meter is calibrated starting with Qmax and followed by the lower flow rates. At each flow rate a minimum of three runs are taken, each of minimum 60 seconds. The results are listed on the calibration certificate.

On request the calibration results will be compared with performance criteria as stated in the European Measuring Instruments Directive (MID), OIML R137-1, 2, AGA-7, AGA-9, ISO 9951, ISO 17089-1, EN 12261 or customer specifications. If necessary the meter will be adjusted and one or more verification runs will be performed to verify the correctness of the adjustment.

After calibration the test line is disassembled and the meter is prepared for shipping. Electronic certificates and other required data is sent by e-mail while original certificates are sent by courier service.

For each calibration, the customer or its representative is invited for witnessing the process.

GAIL has a very well documented & established Health, Safety & Environment (HSE) policy. Adhering to this policy, strict safety rules are also followed at the Hazira Meter Prover Facility. The facility confirms to the globally accepted ATEX safety standards. All personnel and visitors are required to wear personal protective equipment while they are inside the facility. At Hazira Meter Prover facility we ensure safety of all our stakeholders.

Hazira Meter Prover facility is available all year round, independent of the season. Please contact us for time slot or any general query and requests.